NEW HOME DEMAND UP IN 66% OF METROSTUDY MARKETS

Our October collection of new home and building lot demand in Metrostudy’s 36 markets indicates that typical seasonal decline continues in the majority of markets, but inventory in the pipeline appears stable, and the pace of starts continues to climb. Despite the expected seasonal decline, 66% of regional directors recorded a higher score for new-home demand in October 2015 than in October 2014, and only eight markets decreased year over year. Houston, Raleigh-Durham, San Diego, and SouthernCalifornia were among the eight markets reporting a decrease, a sign that other markets are now catching up in the recovery given that those four markets have been in the top half of our scale for the past year, while other markets have wavered at the mid-point.

Similar to the notion that seasonal slowdown will be a passing storm weathered by spring, the Conference Board’s Consumer Confidence Index fell to 97.6 in October following a reading of 102.6 in September. However, the share of respondents planning to buy a home within six months (which puts us at the start of spring selling season) rose 1.5% month over month to 6.3%—a good sign for the future. 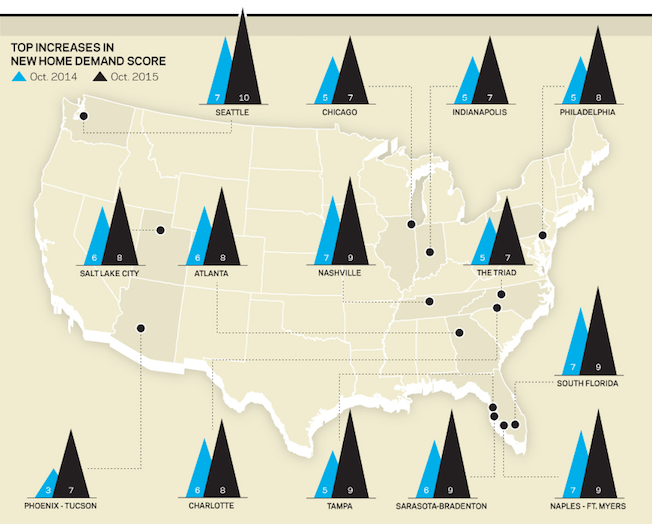 This entry was posted in Home Building, Marketing, Real Estate. Bookmark the permalink.