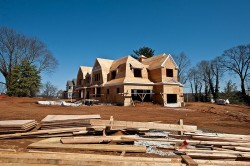 New home sales in the United States are on pace to set a brand new all-time record low in 2011.  This will be the third year in a row that new home sales have set a new record low.  Sadly, this is yet another sign that the U.S. economy continues to grow weaker.  Back in 2005, more than four times as many new homes were being sold as are being sold today.  The home building industry is one of the central pillars of the U.S. economy, and the fact that we are going to set another new record low for home sales in 2011 is a really bad sign for those hoping for an economic recovery.  Unlike most of those that work in the financial industry, those that build new homes produce something of lasting value for American families.  In addition, millions of Americans have traditionally made a solid living by building and selling new homes.  But today the market for new homes has totally dried up and large numbers of those jobs are disappearing.  Some of the reasons for this include high unemployment, a glut of foreclosures on the market and the tightening of lending standards on home loans.  In order for the U.S. to have anything resembling a healthy economy again, we are going to need a revival in the sale of new homes.

But unfortunately, it looks like things are getting even worse.  In August, the number of new home sales declined for the fourth month in a row.  That is a very troubling sign because typically summer is the best time for new home sales.