One usually thinks of start-ups as cutting-edge. But it turns out the hottest growth area for new businesses isn’t so sexy: It’s construction.

More entrepreneurs are setting up construction companies, according to a report released earlier this week. The increase comes as construction workers who lost their jobs during the slump in the housing market start their own businesses, taking advantage of a recent uptick in home remodeling and a modest boost in new home construction. 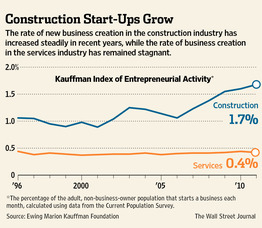 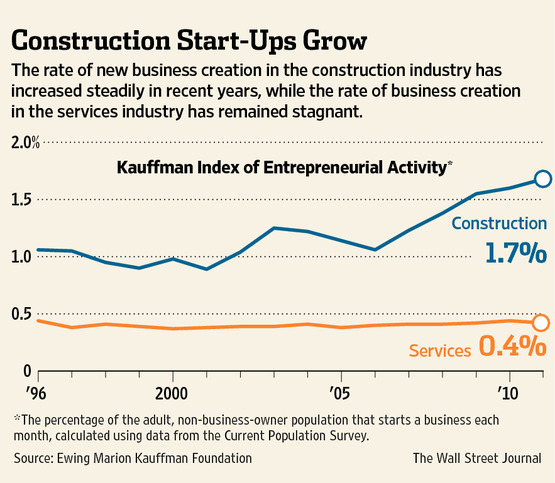 “Improvements in home building last year meant that new construction firms were not swimming against as strong a current as in the previous four years,” says Stuart G. Hoffman, chief economist for the PNC Financial Services Group in Pittsburgh.

New entrepreneurs entering construction accounted for 24% of all U.S. entrepreneurial activity in 2011, a year when overall business creation dropped by about 6%, according to recent estimates by the Ewing Marion Kauffman Foundation, a nonprofit organization that studies entrepreneurship.

The rate of entrepreneurial activity in construction was 1.7% in 2011, up from 1.6% in 2010 and 1.2% in 2007, the Kauffman report says. The activity rate is a measure of the percentage of the adult, non-business-owner population that starts a business each month, using data from the U.S. Census Bureau and the Bureau of Labor Statistics, Kauffman says. The construction category includes restoration, remodeling and painting firms, in both commercial and residential markets.

Billy Kern of Raleigh, N.C., says he struck out on his own as a general contractor after he was laid off from a small construction company in 2009. Last year, he bought a Mr. Handyman franchise. “I figured I’d stay with my strengths,” says the 49-year-old, rather than try a career in a new field.

Employment in construction increased on a seasonally adjusted basis to 5.5 million in December 2011 from 5.4 million a year earlier, according to data from the Bureau of Labor Statistics. But the industry still has a far way to go to reach prerecession levels: In 2006, monthly measurements of construction employment surpassed seven million.

Overall, services businesses represent the biggest slice of the U.S. economy, as they have for more than a decade. The services sector accounted for 54% of all start-ups last year, Kauffman says. But the rate of entrepreneurial activity in services—which ranges from accounting and consulting businesses to beauty salons and graphic-design shops—held steady in 2011 at just 0.4%, about the same as in 2010 as well as in 2007, according to Kauffman.